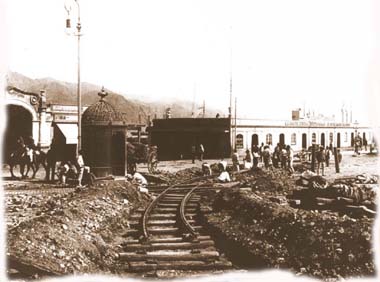 In 1884, the Omnibus Company started a bus line between Santa Cruz and La Laguna operating a single one-horse open carriage.

By 1885 they had the four and six horse stagecoaches, with an additional line from Santa Cruz to La Orotava. 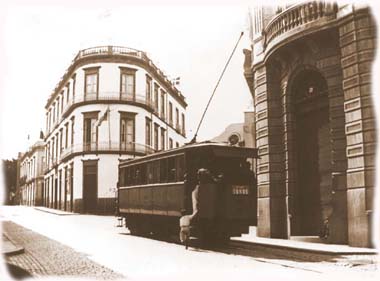 In 1898, development of the electric tram system began, with the inaugural trip in 1901 when the electrical street car started up it's services transporting people from St. Cruz to La Laguna.

On the picture left you can see the old tram going up Calle Castillo, today the busy pedestrian street where tourists and locals find a large number of shops. 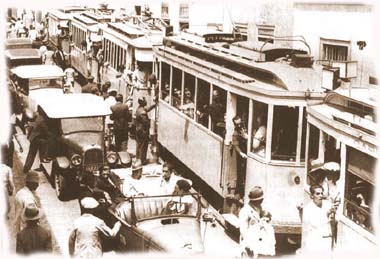 In 1904 the line was extended to Tacoronte, and it was operational until 1951 when cars and buses (Guaguas) took over  after a series of problems and accidents.

As you can see, the streets were rather crowded. No wonder accidents happened..

You'll fine a chronological overview of the old tram on the pages of the bus company.

In 2007 the brand new Line 1 of the Tranvia MetroTenerife was established, now a modern electrical tram delivered by the famous German company Alstom. All wagons have air-conditioning and a fully automatic ticket system.

Even though it doesn't run up the main road Calle Castillo this time, it has become very popular among the locals as well as the tourists.

The Metro starts by the see-side close to the Opera and runs up through the main city, and ends up in La Laguna after passing both the hospital and the University along the way.

A new Line 2 is already planned going from La Cuesta to Tíncer.

See this official presentation video from Line1. You can find more videos on YouTube.com.