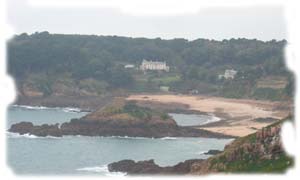 In October 2005 we were so lucky to be invited by my employer Cronus for a trip to the channel island of Jersey.

Jersey has a long history linked to the Vikings coming down from the north, the Normans as they were called. The French king offered their chief Rollo (Gange Rolv) peace by giving him the land later known as Normandie in France.

Later, Rollo's son William included Jersey in the duchy of Normandie, and when he conquered England at Hastings, a link to the English Crown was made.

In 1204, the channel islands were give a choice between France and England, and since then Jersey has been English. But they are not a art of the United Kingdom, they have their own government, laws and currency.

Because of all the wars with France, you can find old defenses like towers and walls all around the island.

During the World War II, the German forces occupied Jersey and started to build fortifications for their large canons around the coastline, all of which you can see today.

They were built by a large number of Russian POW's brought in by Hitler. Many of them died there.