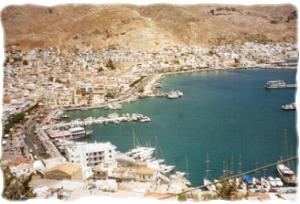 Kalymnos, the fourth largest island in the Dodecanese (The 12 Islands), is situated between Kos and Leros. The island most known for it's sponge divers, has a very mountainous, but yet picturesque, landscape.

As many of the Greek islands, Kalymnos has seen many different conquerors; the Persians, the Venetians, the Genoese, the Knights of the Order of Saint John, the Turks and the Italians from 1912 until nearly the end of the 2nd World War.

Kalymnos was finally liberated on March 31st 1947, and was incorporated into the Greek Nation in 1948 along with the rest of the Dodecanese Island.

The capitol Kalymnos, or Pothia, with it's colorful, two storey houses, is built like an amphitheater, housing a population of 11.500.

The Municipal buildings in Venetian style were constructed by the Italians between 1930-35. Along the seafront lies a variety of shops and cafes where you can enjoy a cold drink and a good lunch. 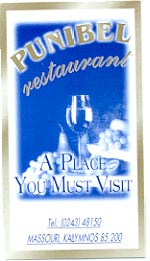 In the small village of Massouri, it's possible to enjoy a quiet tourist life with the family or some friends. A number of restaurants and a handful of bars, make the nightlife busy enough for the grown-ups, but perhaps too dull for younger people seeking more action in discotheques and nightclubs.

Standing above the rest, especially in service, was the restaurant Punibel and the bar/cafe Sail Away.

Traveling with 6 people and 3 children (2 in baby carriage), we were depending on the understanding and some extra help.

And we weren't disappointed!

Together with the nice comfort and service of the Continental Hotel, it became a most memorable vacation for all of us!

We found several nice beaches on Kalymnos, the public beach of Massouri being one of the best. In the small village of Vlihadia, we found this small beach next to a nice tavern.

Going past the village of Myrties, you come to Kantouni. This sandy beach had more waves than most others, and are worth a visit. More pictures below. 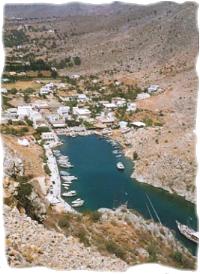 Apart from the capitol Pothia, there are a lot of nice places to visit. In the hillside above Pothia you find the Citadel of the Knights. It was built by the Knights of St John and the chapel of the Virgin, within its walls, is on the site of an ancient temple.

The citadel overlooks three ruined windmills and has great views of both Pothia and the central part of the island. 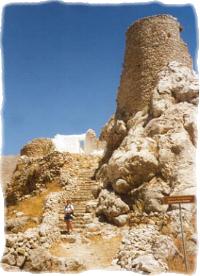 Driving up the east coast from Pothia, past the local industrial area and the deserted rocky landscape, you suddenly arrive in the village of Vathis.

The village is know for it's "fjord", and the many charter boats of Pothia take the tourists here for a short visit and a nice swim. Two local taverns is at your service. This is the only place on Kalymnos where it's possible to grow mandarins.

In Massouri we found a small church (se picture below) overlooking the main street below, and on the other side is the small island of Tellendos where you find several nice beaches and some nice local taverns. We didn't go across, but people I know tell about some amazing beaches on the other side.

After staying on Kalymnos for 2 nice week, we decided that it's a great possibility that we will be going there again. Reminded of the sunset view from our hotel room, we will at least have some great memories of the island. 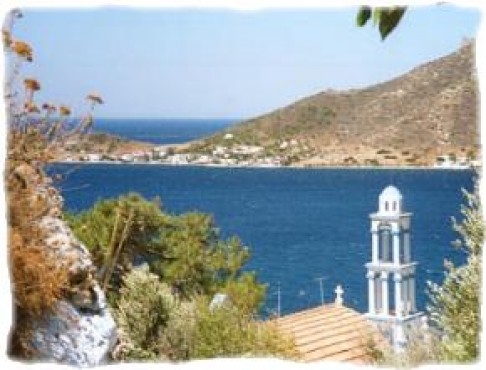 Local church and the island of Tellendos in the backgroundPhoto by JK, August 2000 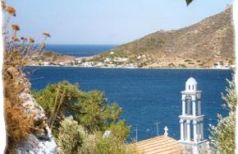 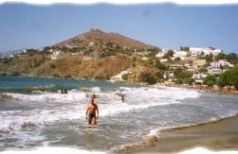 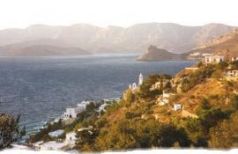 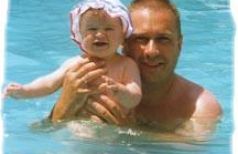 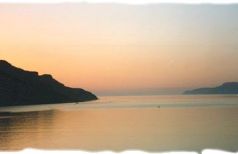 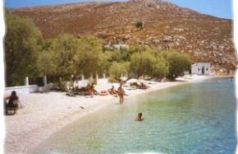