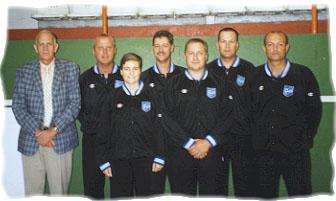 La Coruna was the host for the "2nd European Championship for Young Women, Qualifying Round, Group E", and I was nominated by FIBA as the accompanying referee when the Norwegian national team went there to play Spain, Germany, Israel and Ireland.

Together with 5 other refs and the FIBA Commissioner, I spent 4 days of basketball in the arena close to the big football stadium.

One night we also got tickets to a football game between La Coruna and Real Madrid, together with about 80.000 enthusiastic locals... 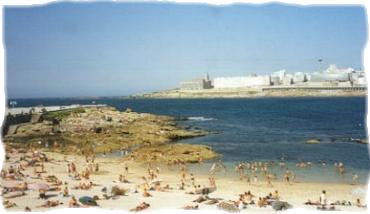 It was very hot in the arena, and running indoors for 2 hours in our uniforms was a somewhat sweaty experience.

Close to the basketball arena I found this nice beach.

The Atlantic ocean looks nice, but the temperature was in fact 16 degrees (C), somewhat cold for most people.

But just lying in the sun and relax was what most people did on this nice sunday afternoon.

Looking towards the city one will observe that the downtown area is built close to the beach and the Atlantic ocean.

One day we had a nice sightseeing to the neighbor city; Santiago.

To this cathedral thousands of pilgrims walk each year. 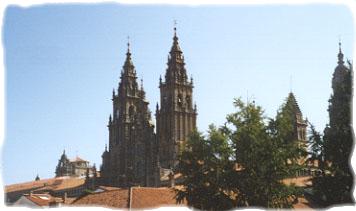 We also visited this magnificent building, however using a car and not for the same reasons as all the pilgrims.

Read more about the pilgrims, Santiago and the cathedral.

Santiago and La Coruna are both situated in the region of Galicia, northwest in Spain.

Historically this region was once visited by the Vikings from north, making their marks in the local culture.