Since we had have more space, and little Erik had joined us, we started to search for a breed not-too-big, kid-friendly and if possible, allergy friendly.

After many hours going over different types, we finally chose the Tibetan Terrier, or Dhoki Apso as it was called by the Tibetan natives.

We found little Yak in Sweden, and in 2005, he joined our family here in Fredrikstad.

Due to some unfortunate incidents, he had to leave us in December 2007.

The Dhoki Apso race originally comes from Tibet, and is more than 2.000 years old. It was thought to bring luck, and was even seen as a holy animal.

The Tibetan Terrier, who's not an actual terrier (not even related!), was found following the nomads or living with the monks in their monasteries as guard dogs or shepherds. 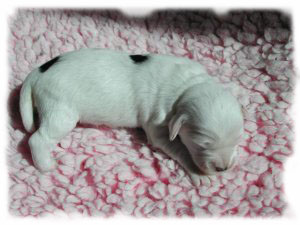 Our puppy was born in Kyang's Kennel in Sweden in August of 2005.

Here on the left he is about 6 weeks old, and you can already see he's getting more long-haired.

By the end of September 2005 he's started to play outdoors with his 5 sisters and brothers at his birthplace in close to Gothenburg.

His full name is Kyang's Yak, named after the great Tibetan ox, the wild Yak, once found all over the Tibetan highlands, now mostly located in the cold mountains of China.

We have put together his pedigree 3 generations back, showing several nice champion dogs in the family, and the latest results of his health tests (eyes and hips).

As you can see, Yak grew into a strong (yet still very stubborn) adult boy, demanding more exercise, but also giving back more love and affection than before.

In late 2007, Yak unfortunately had to leave us, and on December 7th he went back to his roots in Sweden and the area of Lödöse, just north of Gothenburg.

During the autumn of 2008 we found out that Yak had been put to sleep.