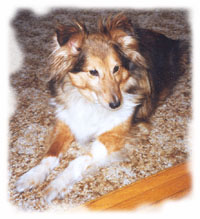 When my brother and I was younger, our parents decided to buy a dog. And their choice was the Shetland Sheepdog, also called Shelty, a smaller version of the typical collie as seen in the famous TV-series "Lassie".

Her full name was in fact Connie Arac of Crossharbour.

Little Connie was really loving and caring towards us boys, and she fitted straight into our family life, first in Oslo and later in Halden.

Connie's health became later very poor, and to her own best she was put to sleep, reaching the high age of 15 years.

We all miss her very much. Especially my father.