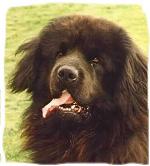 Elin's first dog, Colargol's Globus, was a Newfoundlander, often called newfy or nuffe. He was a big, strong, longhaired and stubborn dog that mostly did what he wanted, and had a hard time listening to his owner.

Going for a walk with Globus could be some experience. At least when he spotted a cat or another dog, and you tried to hold him back. No wonder he ran into the street some years ago and was hit by a car.