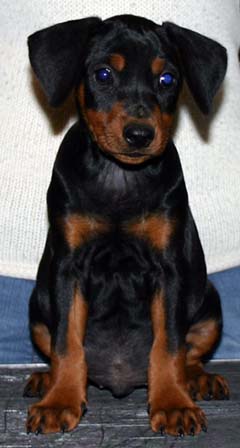 During the summer of 2008, and after a countless number of hours in front of the PC searching the internet for a type of dog that would suit our family and surroundings, we eventually landed on the German Pinscher.

Contact was made in July 2008 with a breeder in Sweden, and in the beginning of August we visited the Ta Wei's Kennel south of Östersund to bring home our new family member.

A suitable name for an active little guy, maintaining the motorsport theme in the names his litter got from the kennel, was chosen. Officially registered as "Ta Wei's Dragbike", his nickname was Turbo.

Unfortuneately Turbo had to leave us in April of 2017 after several incidents proving that we could not trust his behaviour. But we all miss in in spite of that an will always have him in our memories.

Feel free to check out his pedigree or pictures on Facebook available here.